Before the settlement of the Swan River Colony, Captain James Stirling was instructed to ensure that land be put aside for public requirements such as roads, churches and cemeteries. He followed his orders and some months after their arrival, John Septimus Roe surveyed the land and decided that the burial grounds should be located high up on a hill to the east of the settlement. With these humble beginnings, the East Perth Cemeteries were established.

Despite me constantly referring to it as the East Perth Cemetery, the word ‘Cemeteries’ is actually correct. Although today it is fenced off and stands as one, in the past, it consisted of seven religious denominations (Roman Catholic, Wesleyan, Church of England, Congregational (Independents), Hebrew, Presbyterian and Chinese) which were each independently owned, controlled and separated by roads and fences.

The power lines – evidence that a road once ran through the cemetery.

With the onset of the hot summer weather, it soon became apparent that heat and the deceased were not going to mix well. To prevent burials being carried out at random which could result in ‘unpleasant consequences’ Captain Stirling (now Lieutenant-Governor) ordered that burials should only be carried out as soon after sunrise as possible or an hour before sunset.

As the population of the Swan River Colony increased, it became necessary for a small chapel to be built to provide shelter for the mourners as well as the dead. Designed by Richard Roach Jewell (who is also buried in East Perth Cemeteries), it was completed in 1871 and was named St Bartholomew’s Mortuary Chapel. 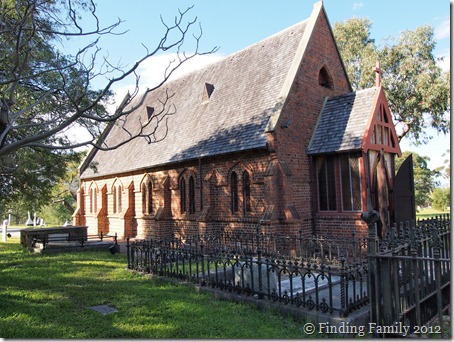 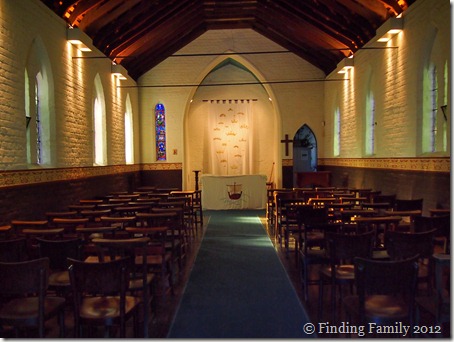 Extensions were made and in 1888 it became a Parish Church. If you look carefully inside you can still see the distinct line between the old and the new floorboards and outside, the brickwork also reflects the change.

East Perth Cemeteries remained Perth’s principal burial place until burials started in Karrakatta on 24 April 1899. It was officially closed for burials on 12 July 1899 but they actually continued up until 1916 for those people who wanted to be buried with their loved ones in family vaults or plots. The 1916 cut off date was extended to 1919 but by 1924, it was stopped. During this time period there were also many exhumations and reinterments between East Perth and Karrakatta.

The plaque in East Perth Cemetery commemorating the link between East Perth and Karrakatta.

It is the resting place of around 10,000 of Western Australia’s forbears who, in their own way, helped mould the state into what it is today. Such examples include: 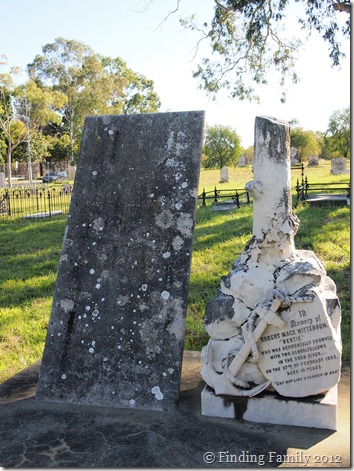 The Monger Family vault – including John Henry Monger who was a member of the Western Australian Legislative Council from 1870 to 1875.

Unfortunately throughout the years respect was not often afforded to the dead. Once East Perth Cemeteries officially closed in 1924 it seemed to be forgotten by the people of Perth and subsequently fell into disrepair, often becoming the target of vandals. Such examples can be seen in the photos printed in the Western Mail in 1925. In 1926 it was reported that it was overgrown with grass and weeds and that stray animals could wander in and out for a feed. Several years later in 1928 the Mirror stated that headstones were still being continually damaged.

Public debate raged about what to do with the now defunct cemetery. Residents of the area banded together in 1929 to form a committee in order to discuss what is to become of the East Perth Cemeteries. It is said in the article that its removal was something that was ‘keenly desired’ by some residents.

The forming of committees did nothing to stop the disrespect shown towards the burial grounds of our early settlers. Dilapidation from being exposed to the elements and at time, to people, continued throughout the years. Reports of children playing hide and seek in the family vaults and even removing parts of skeletons was printed in the Sunday Times in 1931. A year later, its disgraceful conditions were once again photographed and printed in various papers.

The fact that it sat on prime land with views of both the Swan River and the city also sparked debate about the use of such land. When deciding where the new Perth Hospital was to be built, the Sunday Times reported in 1934 that the land where the cemetery stood would be perfect for the hospital and would in fact ‘remove an eyesore in the ill-kept grounds’. In the end the hospital was not built here and so the cemeteries remained as they were.

Wilful damage continued and in 1941 two young boys were brought before the Children’s Court for systematically destroying over 50 headstones.

They were playing in the cemetery, it was stated, when they noticed that one headstone was cracked. One suggested pushing it over. They did, and then proceeded systematically to push over 55 others. When they struck difficulty in pushing any over, they rested their backs against iron railings and pushed with their feet.

Time passed and unfortunately not much changed in the way of human behaviour. In 1949 it was reported in The West Australian that vandals had climbed an 18 foot statue in order to paint the face of an angel red. In some cases the coffins were not spared (1950) and the Sunday Times printed their theory that perhaps treasure hunters were the reason why so many vaults were being damaged (1951).

My recent visit to the East Perth Cemeteries showed that some of that damage still exists today.

At times, reports of damage were not the only reason why East Perth Cemeteries made it into the papers. Often a place that people associate with doom and gloom, it was perhaps these qualities that drew so many unhappy souls to its grounds in order to end their own lives. My searching sadly uncovered three such stories.

On the other hand, those who had no qualms about the dead and who had nowhere else to go were found to have slept amongst the gravestones in the cemetery and during bad weather, even slept in the vaults amongst the coffins.

By far, my favourite article which mentions the East Perth Cemeteries was written in such a way as to make you think it was all an elaborate story. I did a bit more searching and discovered that it definitely was not. Private Detective Eric Robson was a real person and often had write-ups in the Mirror concerning his escapades when uncovering unfaithful spouses in the 1930s and 1940s. I have to say, they make for an amusing read! In this instance, some careful following led him and his client to his client’s husband where he was found having a secret midnight rendezvous with another woman in the back of his car, which was parked in the middle of the East Perth Cemeteries. Read the full article: Tabbies and Tombstones.

It is a place full of history and when you do a little digging, it is a place that has a history all of its own. I recently visited East Perth Cemeteries (its open every Sunday from 2pm to 4pm) and as usual, found it to be an historical place of peace not far from the madness and hustle and bustle of the city.

Take your time, wander around the grounds and look upon the headstones of those who were involved in the early progress of our State. Marvel at the giant monuments and elaborate iron railings and transport yourself back to a time so vastly different to our own. Spend some time admiring St Bartholomew’s Church, have a seat and sit quietly, musing on the fact that over the many hundreds of years, souls just like yourself once did the same. If you’re lucky (such as I was) one of the knowledgeable volunteers may even offer to share some of the history with you.

East Perth Cemeteries are a treasure and we as Western Australians are lucky that they still exist. I will forever be grateful to all the people throughout the years who managed to keep developers at bay and in doing so, preserved the cemeteries for future generations. They hold a special place in my heart but then, they always will. They are, after all, the resting place of my own Great x 4 Grandparents. 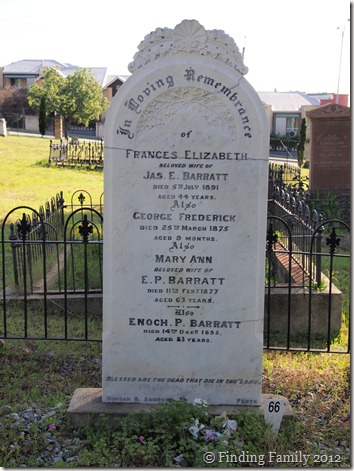