Throughout my childhood my love of history and of all things concerning the past was something that I could not really express in words but it was, without a doubt, subtly encouraged by my Grandparents. Our outings to places such as the Swan View Railway Tunnel filled me with awe and I listened, enchanted by my Grandma’s words, as she told me stories and filled my head with visions of a world from long ago.

All Saints Church in Henley Brook is another historical place we visited and the memory of that day from when I was a little girl has always been clear in my mind. My Grandma and Grandpa wanted to buy some grapes from a vineyard in the Swan Valley and suggested that my Mum, my brother and I come along for an outing. After the grapes were purchased they stopped off at All Saints Church where we wandered around the little graveyard and admired the inside of the tiny church. My Grandma prayed and I remember that I (naively) had no idea what she was doing. We left the church and walked around to the back where a pathway led us right down to the bank of the Swan River and we stood there awhile, admiring the view.

This was my first and only visit to the church and for the longest time I’ve felt the need to once again find it and revisit the scene of my memories. This need was finally satisfied on a quiet Sunday morning and I was ecstatic to find that both the church itself as well as its surroundings were mostly unchanged. 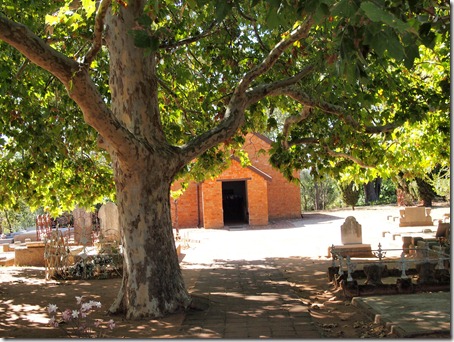 The original small mud-brick and thatch church was built by Richard Edwards (a master bricklayer from Gloucestershire in England) between the years 1838 and 1840. The first service was held on 10 January 1841 by the Rev. W. Mitchell with a total of 69 people in attendance.

The above headstone is one of many located in the cemetery which are associated with the early inhabitants of the area. Forrest Barrett-Lennard was buried with his father, George and mother, Amy. He was 16 years old when on 6 May 1913 he was swept off the rocks while fishing near Trigg’s Island in North Beach and was tragically drowned. His brother witnessed the accident but sadly could not render any assistance. Information obtained from: 1913 ‘THE WORLD’S NEWS.’, Sunday Times (Perth, WA : 1902 – 1954), 11 May, p. 5 Section: Second Section, viewed 8 April, 2012, http://nla.gov.au/nla.news-article57746165.

The church is located on the spot where in March 1827 Captain James Stirling set up camp  while conducting a survey of the Swan Valley. The beautiful area left a strong impression on him (nearby Ellenbrook is named after his wife Ellen) and it is said that during his time here the vision of a state arose in his heart and mind.

All Saints Church is one of the oldest churches in Western Australia. Services are still held each Sunday and it is open to visitors seven days a week with entry being by donation. In my opinion, it is well worth a visit.

11 thoughts on “All Saints Church–Henley Brook”

Arriving in Bunbury on 28 February 1932, the King Lud began loading wheat and was one of many ships anchored at the jetty during (what was noted to be) an “unexpected busy period“. It departed for Fremantle on 8 March and arrived on the following day. Upon their arrival, a report was made to the […]