When I happen to come across a photo of a beautiful historic building in Perth it’s sadly all too common that when searching for the history of the building I also discover that it no longer exists. I don’t know what happened in Perth during the 1960s and 70s but for some reason, during these two decades, many historical buildings in the city were torn down and forevermore constrained to exist in the realm of photographs and records. One such building, at one point, belonged to the Swan River Mechanics’ Institute.

Established in 1851, the Swan River Mechanics’ Institute’s purpose was to provide “intellectual recreation and improvement to the mechanics and other inhabitants” of Western Australia. They aimed to form a library on the premises for subscribing members, deliver the occasional lecture and conduct classes on any particular science or study. It was also home to a natural history collection which eventually moved and formed a part of the Western Australian Museum’s collection. Members’ subscription costs were 2s 6d per quarter.

A small building was eventually erected on the corner of Hay Street and Pier Street for the purpose of housing the library as well providing a reading room/meeting room for its members. 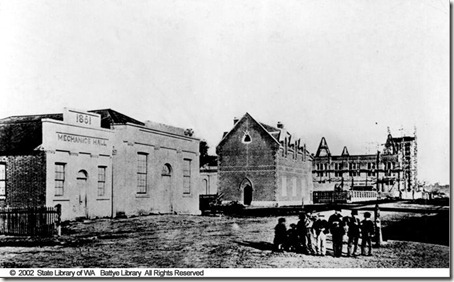 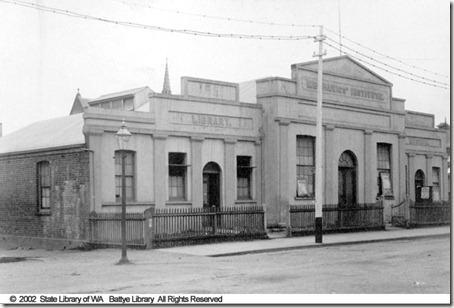 During the early days, meetings were also occasionally held in temporary locations such as the Perth Boys’ School or the Court House (the Old Court House Law Museum). One of the earliest lectures given in the Court House was by the Rev. D.T. Boyd on astronomy.

As Perth grew, so did the need for the Institute to have new premises built primarily for the comfort of its members as well as for the purpose of increasing revenue by 1) allowing various rooms to be leased and, 2) through the shops and offices which were located on the ground floor facing both Hay Street and Pier Street.

The building was completed in 1899 and was considered “substantial and artistic”. 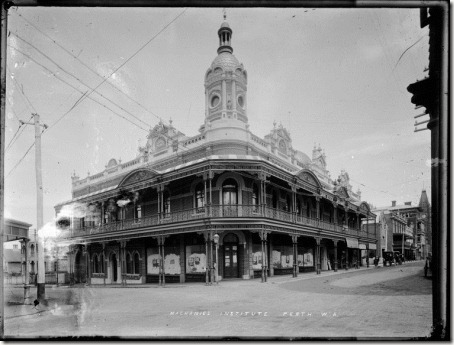 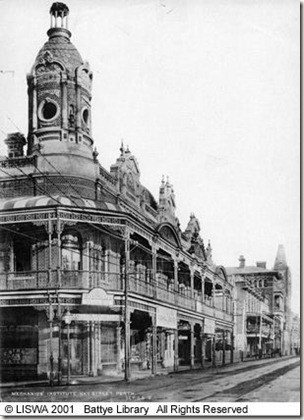 All three photos show different angles of the building and in each, in the far right of the background, the Perth Town Hall clock tower is visible.

The beauty of the building is plain to see in the above photographs however one is limited to imagination when considering its interior. A writer for The West Australian wrote a detailed description of the entrance:

The building served the Swan River Mechanics’ Institute for several years and continued to do so even when their name changed to the Perth Literary Institute in 1909. It remained in the hands of the Institute until 1957 when the Perth Council took it over for use as a public library.

By 1969, as seen in the above photo, the building had undergone a number of changes. The balustrades and balconies were removed and the facade looks as though it was given a fresh coat of paint. The removal of the balconies, in my opinion, results in the building losing a lot of its original charm. But, it’s still better than nothing.

Unfortunately, regardless of any improvements, the building was not to last much longer. With the 70s now in effect, in someone’s eyes, the Swan River Mechanics’ Institute building had far outlived its purpose. Land was needed; history was sacrificed. During this period an historic building was demolished to make way for high rise offices and commercial retail spaces. 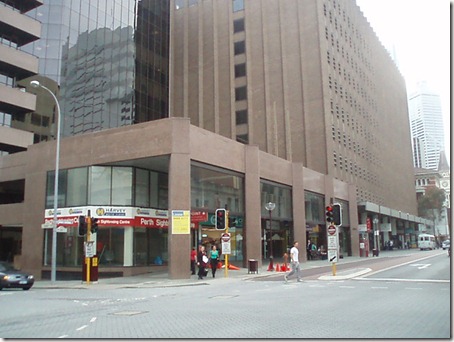 What the corner of Hay Street and Pier Street looks like today. The Town Hall clock tower is once again visible in the far right.

It was while researching the history of the Swan River Mechanics’ Institute that I also came across a website detailing the future plans to tear down the Law Chambers (next door) to build a new public library and plaza.

The aim is to make the area more pleasing to look at and bring into focus the surrounding heritage buildings. It’s nice to see that today people are starting to appreciate history and are finding ways to integrate it with the modern world rather than simply replacing the old with the new. It’s good news, but for the buildings that have long since been demolished it comes a little too late.