Are you a Barratt descendant on Facebook? Click the following link and feel free to join the Facebook group for descendants of Enoch and Mary Ann (https://www.facebook.com/groups/794692100624173/).

When I first started officially researching my family tree (which, consequently was two years ago this August) I set myself the task of trying to find as many photos of my ancestors as possible. My Grandpa kindly gave me his permission to rummage through his photo cupboard and it wasn’t long before I struck photographic gold.

The photos were of my Great Great Grandfather, Edward James Barratt’s family; his siblings, in-laws and nieces and nephews. The main group photo is a copy of an original and instead of putting the pieces together I chose to scan them and simply crop separate photos of each individual. I now do not agree with my original decision and after all this time, have finally put the photo back together.

Unfortunately I do not have the copies (which had names written on the back of them) so many of the young children are unknown to me.

The photo was taken in 1915 at Edward’s sister, Florence Mary Brittain’s house at 186 Stirling Street in Perth. Given the significance of the year (the same year World War I started) I can only assume that the photo was organised so there would be a photographic record of the family before the uncertainty of war was upon them. Four of the men in the photo (Charles Victor Barratt, Reginald Edward Barratt, George Herbert Barratt and Arthur Hanesworth Walton) enrolled in the Australian Military Forces during WWI. All of the men except Arthur (who was killed in action in France) eventually returned home. 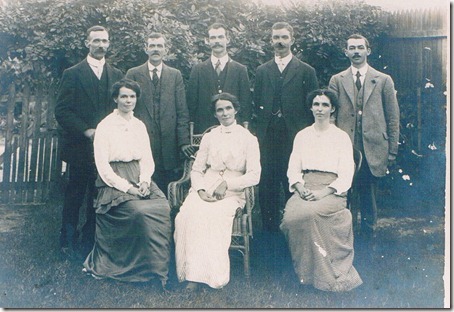 The world and their own worlds were on the brink of enormous change. With these photos they captured a generation of siblings and a generation of cousins. They also unknowingly captured a moment in time when their lives were still in innocence; untainted by the cruelty of war.