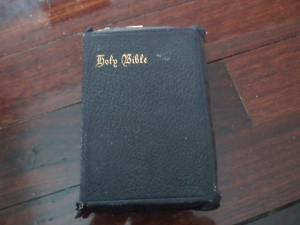 One Bible and one personalised message on the inside: 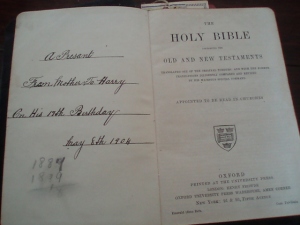 I’ve never been able to resist a good mystery and this Bible was no exception. Revelling in the thought of being able to put on my detective hat I immediately set to work to discover who once owned this Bible.

First things first, who was Harry? As Harry turned 17 in 1904 I quickly worked out that his birth year would’ve been 1887. I also considered the fact that Harry was generally a nickname for people who’s first name was Henry. The Bible came from my Grandpa’s bookshelf so I assumed that Harry would’ve been related to either my Grandpa or my Grandma.

The easiest way to find out who Harry was was to head straight to my family tree. I looked through my Grandpa’s branch first. No luck. There was no Harry or Henry and the year of birth didn’t fit in with the people listed. Harry was born in a different decade. I moved on to my Grandma’s part of the tree. I looked through the Flynns without any luck and turned my attention to the Wallaces. As soon as I viewed my Great Grandmother’s siblings I knew I was on the right track. Her elder brother was named Henry Thomas Wallace and he was born in 1887! Feeling as though I was on the brink of discovery, I clicked on his profile for confirmation and received hard evidence; Henry was born on 8 May 1887, the same date that Harry celebrated his birthday. The Bible had once belonged to Henry Thomas Wallace.

Even though the mystery was solved fairly quickly, questions still remained. It was a present to Henry from his mother, Esther. So how did the Bible end up in my Grandma’s possession? I assume it came to her through her mum and my Great Grandmother, Grace who was Henry’s sister, but still it’s strange how it managed to fall down our branch of the tree. It would’ve made more sense for it to be returned to its original owner. Not that I’m complaining of course. Such family mementos make me feel incredibly proud and lucky that after all these years (107 to be exact) it survived because someone cared enough to keep it.