“If history were taught in the form of stories, it would never be forgotten.”
Rudyard Kipling

Much to my dismay, it is often apparent that there are not a lot of people around me who enjoy learning about history as much as I do. Though (I admit) reading about history can at times be a little boring, Rudyard Kipling hits the proverbial nail on the head; history told in the form of stories is often a lot more interesting and thus easier to remember.

My favourite type of stories are those that focus on what life was like in the early years in Australia. Not just facts, but accounts from people who actually lived during that period of time. That’s when I turn to the digitised newspapers on Trove and that’s how I found the following article in the Western Mail. 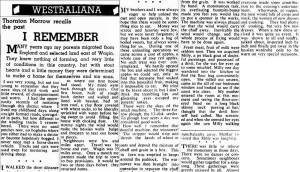 The author, Thornton Morrow recalls the early years of his life when he was growing up on a relatively isolated farm east of Wagin in the early 1910s. The house he lived in as a child is vastly different and unimaginable in today’s world.

Our first house, built of rough bush timber and walled and lined with hessian, had an iron roof, a clay floor covered with wheat sacks, to be liberally sprinkled with water before being swept to avoid filling the house with choking dust.

His parents would travel to Wagin once a month for supplies and returned to the farm in two or three days time. While in town they used what little money they had and bought treats for their children. Such treats came in the form of bags of lollies or once, a case of apples. I’m sure there are many children nowadays who would certainly not look upon apples as a treat. Fresh meat, fruit or milk were not common amongst the household supplies.

Reading this article made me realise how much I take certain things in my life (such as apples and fresh food) for granted. I eat an apple each day and it was quite a shock to read that back then some people considered apples to be a luxury item. Times were obviously tough but as Mr Morrow writes, “..with stout hearts and a little money they were determined to make a home for themselves and six sons.” I take my hat off to the Morrow family as well as any family that lived during these difficult times. They worked hard and made the best of what they had. Though I can easily look back and read about their experiences I know for a fact that if I was suddenly faced with their situation, I would most probably struggle.